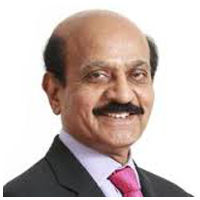 Education: Master’s degree, Industrial Management, University of Michigan
Summary: B.V.R. Mohan Reddy is a visionary, thought leader and a successful entrepreneur who has placed India on the global map for leading-edge Engineering R&D services. Having established Cyient (formerly Infotech Enterprises) in 1991, he pioneered CAD/CAM solutions serving international clients. Today, Cyient has 3500+ Crore revenue and employs 14,000+ engineering professionals.  Mohan Reddy served as Chairman of NASSCOM for 2015-2016, and Chairman of CII, Southern Region (2008-09).  He is a Director on the board of T-Hub, the largest incubator in India.  He has also been appointed as Director on the Board of NSDC, and Member of Court of Governors of Administrative Staff College of India.  He is serving as the Chairman of the Board of Governors for IIT Hyderabad, and also board member of NIIT University.
Mohan Reddy has been bestowed with multiple prestigious awards including ASME Leadership Award in 2011 and in 2012, he received corporate excellence award from IACC. He has done Masters in engineering from IIT-Kanpur, and from The University of Michigan, Ann Arbor, USA. He received honorary doctorates from the JNTU, Andhra University, and KL University.  Mohan Reddy has been appointed as Honorary Consul of Federal Republic of Germany for states of Telangana and Andhra Pradesh.