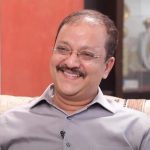 Sudhish Rambhotla is a serial enterprenuer and chairman of colorchips group of companies . He is a alumini of harvard buisiness school,a Chartered Accountant a L.L.B. by qualification and has been conferred a doctorate degree by the Burkes University for his professional contributions and.

A number of Awards have been conferred by various organizations in recognition of the contributions and accomplishments in various fields such as Udhyoga Prathibha Ratan Award by All India Business Development Association, Gem of India Award by All India Achievers Association, Rashtriya Ratan Award & Indira Gandhi Sadbhavana Award by Global Economic Council, Samaikya Bharata Gourav Satkar by Delhi Telugu Academy etc., on various occasions.

Is also recipient of M/s. Toon Boom Technologies (Canada) Award for contribution to Indian Animation Industry.
Has travelled widely and done business with major corporate houses in India and abroad.

– Has been actively involved in policy making for the industry in various industry bodies and also in Government industry groups formed by the Andhra Pradesh State Government.

– Has been invited as a Speaker at various conferences both in India and Abroad.

– Was a Jury Member of the International Emmy Awards, 2006.

– Has been active supporter and propagator of Culture & Arts and was invited as Chief Guest / Guest of Honour in a number of functions.
Contd…2….

– A Charitable joint initiative along with Dr. Reddy’s Foundation to train the under privileged youth of the society free of charge on animation courses which will enable them to have gainful employment.

Media Coverage:​
Has been featured and covered by all the leading Channels, News Papers and Magazines on a number of occasions both at corporate and personal level. Has also been featured in international magazines and journals prominently on a number of occasions.
– Featured on cover page of “India Today” magazine as one of the prime movers of new technology Industry in Andhra Pradesh.
– Featured by Times of India as one of the top 20 visionaries of Andhra Pradesh.