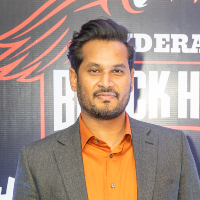 Mr. Abhishek Reddy Kankanala, an innovator and entrepreneur with 20 years in business leadership, operates a diverse portfolio of ventures, encompassing sports teams, IT and media, logistics, restaurants, construction, and more. He takes pride in his ability to spot valuable opportunities across industries and bring the right people together to turn them into prosperous enterprises.

Mr. Kankanala is a principal owner/co-owner of several professional sports teams across multiple leagues, with each one of them having a national television viewership of over 30 million worldwide. His catalogue comprises the Bengaluru Raptors, a two-time world champion and the current defending champion, of the Premier Badminton League, the Hyderabad Black Hawks of the Prime Volleyball League, and the Bengaluru Brawlers of the National Boxing League. Through his involvement with the leagues, Mr. Kankanala envisions an India where sports other than cricket can also command a primetime presence. An avid outdoor enthusiast himself, Mr. Kankanala’s sporting interests range widely from golf to snowboarding to windsurfing.

After becoming the majority shareholder in Whizzy, a logistics provider, and taking post as its Director, Mr. Kankanala quickly transformed it from fewer than 20 riders to over 700, with a 12,000% boost in revenue, in just nine months. At the same time, as the Director and CEO of DevPixel, an IT firm, he orchestrated the successful expansion into several new and distinct markets, as well as the acquisition of a number of companies.

Beyond his business ambitions, Mr. Kankanala is passionate about supporting higher education for the underprivileged, and currently sponsors around 180 students across India. In addition, he and his wife regularly donate their time and resources in furtherance of other charitable efforts, from green energy initiatives to free laptops for schools.