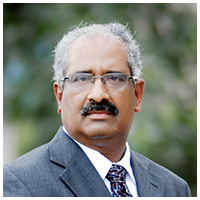 Summary:K Ravi is the Managing Director of NCL Industries Ltd., the flagship company of the NCL Group. He started his business career at an early age as an able lieutenant of his father Late Mr. Ramachandra Raju, who established Deccan Nitrates Pvt. Ltd. Deccan Nitrates pioneered the process of recovering Sodium Nitrate and Ammonium, Nitrate from the effluents generated by Nuclear Fuel Complex, Hyderabad. The Nuclear Waste was an environmental and health hazard, if left untreated. Deccan Nitrates was a novel experiment which proved that it was possible to convert a pollution control measure into a viable commercial venture. This concept was later emulated by many others. Mr.Ramachandra Raju embarked on another pioneering venture in 1979 to establish one of the earliest mini cement plants in the country – Nagarjuna

Cements Ltd., later re-christened as NCL Industries Ltd. Ravi joined his father and has been at the helm as Managing or Joint Managing Director for most of the time. He took over the reins as Managing Director in 2003, upon his father’s retirement. NCL has posted an impressive growth during Ravi’s stewardship. The capacity grew from 2,97,000 TPA to 27,00,000 TPA. The Boards Capacity was expanded by 200%, with the setting up two additional plants. From a little over Rs.100 crores, the company has achieved the turnover of Rs.1165.42 crores in FY 2016-17. Ravi has a reputation for being a manager with exacting standards. He demands recognizes and rewards high performance from his executives. At the same time, he takes keen interest in the welfare activities for his employees, and pays particular attention to the housing, education Medical facilities provided to the employees and their families. Known to be a workaholic, his only concession to relaxation is Golf – a pastime he indulges in during weekends.​