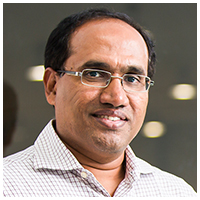 He is a Founding Director of M/s. Orpine, Inc. established in 1999, which is an Atlanta & Hyderabad based IT firm engaged in Consulting, Software development, Staffing and BPO Operation. Closed 2017 with USD 24+ Million revenue.

He has been serial entrepreneur with interests in Orpine Properties, Inc (Atlanta) with several commercial rental properties and Orpine Agros Pvt. Ltd which is into import and sales of Ethylene products for Ripening of Fruits.