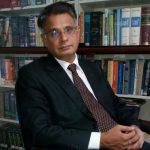 Education: Caradosso school of law, Yeshiya University
Summary:  Enrolled in 1988 as a Lawyer, Mr. P. Raviprasad has over twenty six years of extensive experience in commercial, corporate, joint ventures, M&A, corporate litigation and cross -border issues, capital markets and immigration practice areas. He was a partner in J Sagar Associates, a Law firm in India before he branched out to start Tempus Law Associates in February 2008. He is an advisor to several infrastructure and technology companies and facilitates the incorporation and setting up of operations for foreign corporations and advises on corporate transactional matters.
His client profile is diverse and is spread over various industry verticals like technology, infrastructure, real estate, capital markets, hospitality, health, bio -fuels, among others.
Mr. Raviprasad has extensive experience and regularly advises companies on their day to day corporate issues, plans to raise capital, mergers and acquisitions, joint ventures, restructuring of companies, advising directors on compliance of statutory provisions among others. He handles corporate litigation matters in the High Courts, Civil Courts, Tribunals and CLB. He regularly advises on corporate matters like amalgamations, winding up petitions, shareholder litigation issues among others. He also advises clients on employment law issues, commercial transactions, real estate transactions and acquisition of land properties.
He was the counsel to the Official Liquidator for the Ministry of L aw, Justice and Company Affairs during 1993-1997. Several cases he argued were reported in several law journals. In 1999 he pursued his Masters of Law degree and handled corporate and immigration laws till 2003 when relocated and resumed legal practice in Hyd’bad. He was also the Junior Standing Counsel for T.T.D. for several years. He was also appointed by the Hon’ble Acting Chief Justice of High Court of
Telangana and A.P., as the Advocate on Record for the Hon’ble High Court to represent cases of judiciary in the Hon’ble High Court. He was also appointed by the Hon’ble High Court of Telangana & A.P., as Counsel to the Committee appointed by the High Court in Public Interest Litigation relating to refund of depositors’ amounts of over INR 7,000 Crores. He regularly advises Companies having global and national pres ence in PE, M&A and Real Estate transactions, investments and dis -investments, among others.