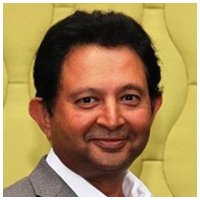 Education: M.S. Industrial Engineering,  The University of Texas at Austin
Summary: Suresh Challa worked as a process engineer for four years at National Semiconductor, Santa Clara, California before moving to India to co-found Asian Coffee Limited as Promoter Director. Asian Coffee was the first company in India to manufacture and export instant coffee to the western world by supplying to large multinationals like Nestle, USA, Tetley UK and put India on the instant coffee map of the world. Asian Coffee’s IPO in 1989 was oversubscribed by 35 times when listed on BSE and after successfully establishing itself in the marketplace in 1992 Asian Coffee got acquired by Tata Tea, currently Tata Coffee. Subsequent to Asian Coffee’s acquisition, Suresh Challa returned to the United States and co-founded PostModern Computing, a software product company in the distributed object technology space of CORBA Middleware in Palo Alto, California. PostModern Computing was the first company in the world to introduce a JAVA Object Request Broker based on OMG’s CORBA standard. PostModern Computing merged with Visigenic Software and launched its IPO on Nasdaq in 1996 with a market cap of $100 Million. Billed as one of the first Internet companies to go public on Nasdaq, Visigenic later got acquired by Borland Inc. and PostModern’s original product VisiBroker is still available in the market, with more than 30 million licenses in use – VisiBroker is the world’s most widely deployed CORBA object request broker (ORB) infrastructure. In 1998 he founded NeoTrax Inc. another software development company in Pleasanton, California and created PersonalMD.com, a web based service for the automation of personal health records. PersonalMD was one of the pioneers in the space of personal health records with over a million members in the first year of its launch.